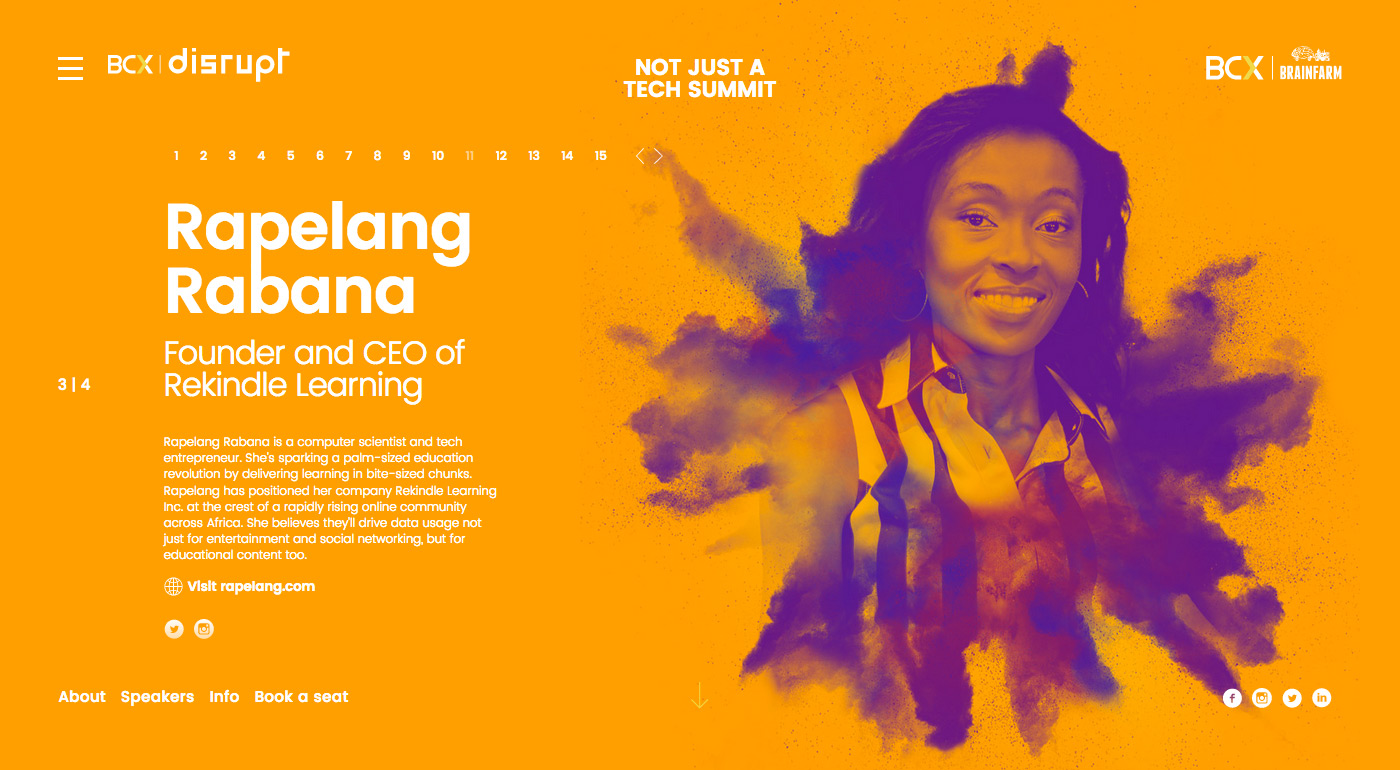 Social instability will get us long before AI does.”

They are also words that are conspicuously absent from the set of adjectives I’d use to describe South Africa’s corporate giants. In those organisations they appear to be, at best, words used by consultants, experts, and “gurus” in an attempt to leverage fear and paranoia to bill hours at a premium.

I can only imagine, then, how intimidating the task of hosting a disruption-themed conference must be when you are a business the size and scope of BCX. It’s one thing putting together an interesting line-up of speakers and a swanky venue. It’s another, completely grafting your brand to the promise of disruption. It’s more than a tagline. It’s more than a PR stunt. It’s a statement of intent.

So how do you make such a conference relevant and memorable in a world where the political, social, and technological landscape changes on a daily, if not hourly, basis? This was the question on my mind while I took my (rather plush) seat, front-and-centre, just before the start of the 2017 #BCXDisrupt Summit. I had no doubt the big names on the bill (none other than Malcolm Gladwell and will.i.am) would deliver, but I was curious as to whether the “supporting acts” could deliver on BCX’s promise that “you’ll never think the same again.”

Man, was I pleasantly surprised.

While I’m sure everyone in the auditorium took something different from the experience, mine was a stark reminder that technology is just a tiny part of the conversation around innovation and disruption. Reinventing capitalism is innovative. Redefining profit is disruptive. Solving problems that make a million people smarter as opposed to ten people richer is innovative.

Sipho Maseko, CEO of BCX parent company Telkom, who 702 recently dubbed the saviour of Telkom, set the scene with a talk that revolved around the continental contrast – Africa’s rife economic and social inequality – and how technology should be a catalyst for equalising society. It was his address that laid the foundation for the theme of lateral thinking around disruption and innovation; a theme embodied in his ‘things do not have to be the way they are’ mantra. More importantly, I believed he meant it.

Senegalese businesswoman, blogger, technologist, and social entrepreneur Mariéme Jamme then took the stage. She shook the room with the story behind her African-led global movement called IAMTHECODE, which has at its heart the mission of building a generation of 1 million women and girl coders by 2030. Jane McGonigal, University of Berkley Ph.D., NY Times bestselling author and world-renowned game designer, gave us a scientific introduction to the case for video games as a platform for uniting and transforming society with this bombshell: The opposite of play isn’t work – it’s depression. Jane is a remarkable communicator – you can watch her speaking at TED here.

Global Senior Director of Social Media and Video at LEGO (how’s that for a job title), Lars Silberbauer, talked us through LEGO’s remarkable social media success. He highlighted some of the mechanics he and his team use to achieve LEGO’s status as the world’s most engaged brand on social platforms. He dropped a few gems, including one that I’ll definitely be stealing and using at Cerebra: Don’t create a campaign, create a stage.

My good friend Richard Mulholland then took the stage, and in true Rich fashion, blew us all away by carpet-bombing us with truth missiles. I have seen Richard speak hundreds of times, but this was, without a doubt, one of his finest moments. Richard challenged our assumptions about futurism, “The Fourth Industrial Revolution”, and the notion of there being nothing artificial about Artificial Intelligence. I realised mid-way through his talk that I hadn’t taken enough notes, but only because I was so mesmerised by the content and delivery. If you want to see more of Rich, sign up for his newsletter or check out his channel on YouTube. It’s gold.

My personal highlight for the day was Rapelang Rabana. Rapelang and I have crossed paths before during her journey with Yeigo, and I was thrilled to see her dominate the stage at #BCXDisrupt. Her ability to combine the complex worlds of business, politics, and society with unmatched levels of clarity and poignancy is seldom seen or heard in corporate South Africa. Some of her pearls:

We only win when everyone we touch along the way wins with us.

Sustainable profit and impact is a byproduct of the right combination of innovation, shared value, and great execution.

The world doesn’t mind you winning as long as you’re not the only one who does.

Rapelang tied a neat bow on Sipho’s original message that we can build businesses that make money and do good, and that these concepts are not mutually exclusive. She also dominated the panel discussion (despite being flanked by none other than Malcolm Gladwell and will.i.am). She dropped a soundbite that reminded us all of our context, and the priorities we should hold closest to our hearts, when she said that social instability will get us long before AI does.

I did not envy Ian Russell, the dynamic CEO of BCX, who was expected to close off the afternoon following a lengthy panel discussion – a bit of a hospital pass! But Ian did an exceptional job of putting BCX’s promises into practice, mentioning a range of initiatives and commitments the business is making to transform business and society through sustainable and meaningful technology solutions. BCX also pulled a classic Kansas City Shuffle when Ian announced that Rapelang would be joining the team as Chief Digital Officer – a massive coup for the organisation. I am genuinely excited to see what Ian and Rapelang, as spearheads of the organisation, could mean for the role of BCX in the market in the future.

All in all, BCX Disrupt was a valuable and insightful experience. I’m incredibly grateful for the opportunity to have attended the event, and look forward to future iterations.