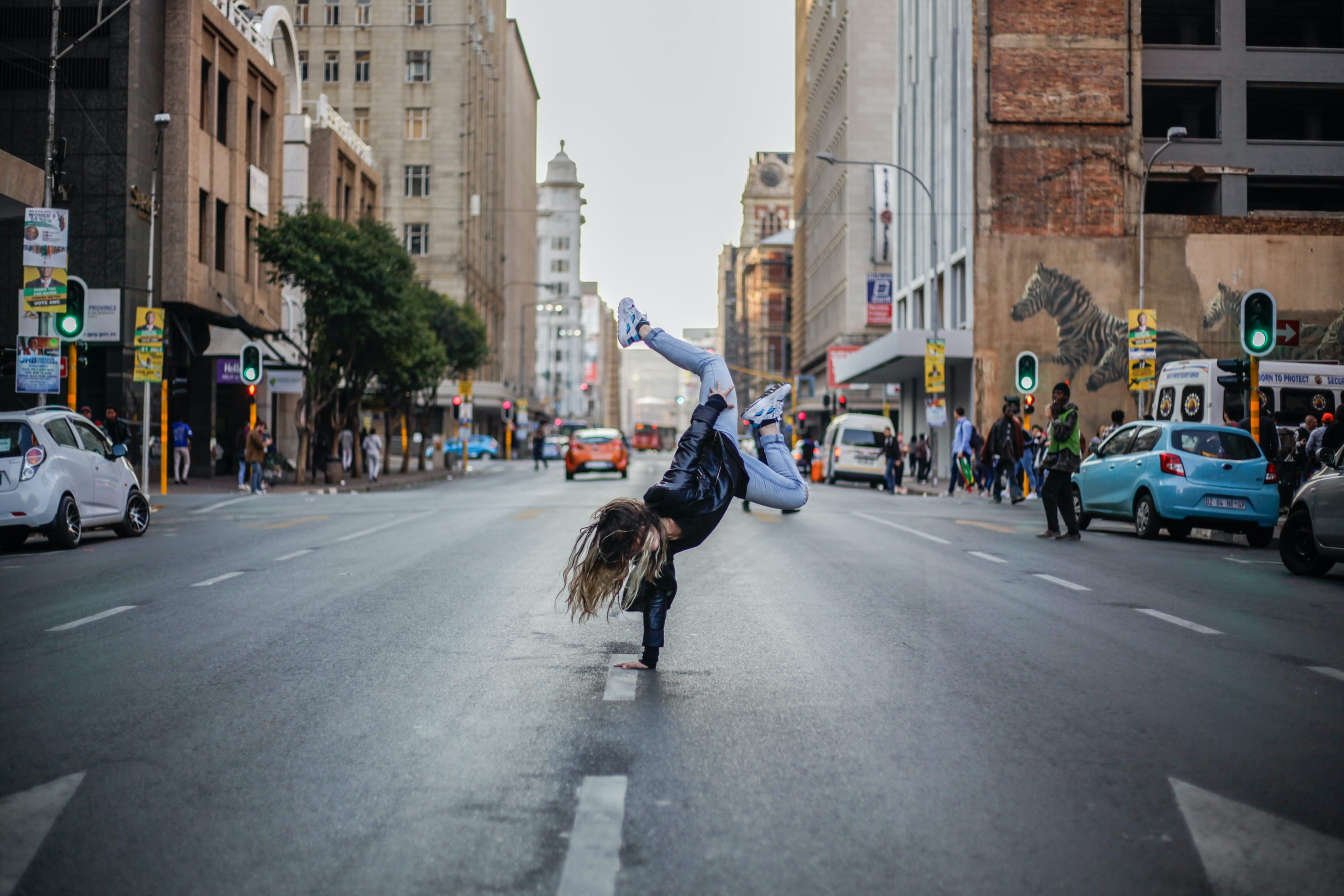 Johannesburg is home. It has been home my whole life and my love affair with this city means I could not dream of living elsewhere unless forced to. This said Jozi can be a tough place to live. She has a brooding temper that bubbles under the surface and manifests in epic thunderstorms, pockmarked roads (stress causes acne), and smatterings of angry residents here and there.

I am lucky though. I’ve never been the victim of violent crime, I have a great job, and tonnes of friends to hang out with every weekend. I’m also brutally aware that this is written from the perspective of a privileged white South African, and with that audience in mind. I won’t assume I can comment on life in Jo’burg growing up in Soweto or Etwatwa or Alex, and don’t intend to.

While many of these friends and colleagues want to leave for greener pastures, I’m wholeheartedly committed to doing a better job of being a Jo’burger, because this surprisingly beautiful, undeniably schizophrenic, altogether arresting city deserves it.

As such I thought I’d share some ideas of how I (and you if you’re like me) can do that.

There are six houses in the complex I live in. True to Jozi fashion, it has a 12-ft wall, a 24-hour guard, and a big steel gate that opens like the one in Jurassic Park. You’d think it would make sense to know each other, and yet when we moved in nobody greeted us. To be fair we didn’t greet anyone either, choosing to send out an email to the homeowners’ group saying “hi”.

Living in Jozi perpetuates an every person for him or herself mentality. We look out for our own. For the largest part we become very isolated from those we live closest to. Provided your neighbours aren’t actively making your life a living hell, let’s make a better effort to get to know the human beings we live a stone’s throw away from.

2. Walk to the shops

Staying with friends in Wimbledon, London recently I was surprised at how normal, and how enjoyable, walking to the shops to get groceries was. We never do that here. Partly because we live further than walking distance from the shops (no high street culture unless you live in Parkhurst where everything is bloody perfect) and partly because we’ve become predisposed to driving everywhere.

Walking to the shops, even if they’re 2 or 3 km away is a great way to see your neighbourhood, stretch your legs, and take a momentary breath from the rat race.

Jozi is the world’s largest city not situated on a river, lake, or coastline and has the appearance of a rainforest (albeit manmade) from satellite imagery.

Johannesburg City Parks and Zoo oversees 2 000 – that’s right, two thousand – parks across the city. While none of them sprawl in the shadow of Table Mountain or end in dunes, a beach, or crashing waves, many of them are surprisingly beautiful and largely unexplored by the average Jo’burger.

Without venturing beyond the Ring Road, you can experience the Braamfontein Spruit, an 18 km stretch of trail that stitches the Sandton Field and Study Centre, Craighall Park, Greenside, Parkhurst, Delta Park, Emmarentia and Westcliff together. You can visit the Botanical Garden, the Zoo, or any one of Jo’burg’s exquisite golf courses. Country Club Johannesburg in Woodmead has fantastic trails, fishing dams, cycling tracks, and more.

We are so used to telling each other that Jo’burg is not an ‘outdoors city’ that we’ve stopped trying to discover all of its outdoors treasures.

While discussing life in Jo’burg with a friend, he said something that hit home hard:

“I’m tired of feeling like my happiness is determined by what I buy at the mall over the weekend.”

As terrible as we are at exploring Jo’burg’s outdoor treasures, we’re remarkably good at supporting her indoor ones. Everywhere. Everywhere. While I enjoy spending money on shiny things as much as the next human, malls can’t be our default solution for entertainment. Picnics in parks should be (see point 3). Or braais, ideally with neighbours (see point 1).

Ok so while it might not be the most public of public transports, the arrival of Uber in Jo’burg has revolutionised my approach to travel. The use of any public transport, be it Uber, cabs, minibus taxis, buses, trains, or even those ridiculous tuk-tuks in the Sandton CBD is such a foreign concept to privileged Jo’burgers. Using public transport is safe (especially when you’re drinking), reduces traffic, creates jobs, connects Jo’burgers with other Jo’burgers, and frees up heaps of time.

I wonder how Jo’burg might change if we allocated one day a month to using public transport exclusively. I think we’d have our eyes opened, we’d be more aware of the challenges and plights of all Jo’burgers and we’d rethink the way we see travel in this city very quickly. Dave Greenway did an in-depth analysis of the costs of using Uber versus your own transport – it makes for fascinating reading.

I’m cursed with zero sense of direction. Before GPS I had to use a map to navigate my way around the world. I grew up in Benoni, so any trip that took me beyond East Gate required significant planning and self-coaching. And shoes.

The map and subsequent GPS systems always encouraged me to enter Sandton from the N3 through Alexandra – London Road being the main artery through the township. Driving through London Road forces affluent and privileged Sandtonites to consciously acknowledge the eclectic, inventive, and shockingly small informal homes of the thousands of less privileged Jozi residents we all have as nearby as neighbours. This makes many uncomfortable, so the longer route through Malboro is preferred.

London Road has, for me, become a symbol of the all-too-prevalent denial that most privileged Jo’burgers live in. If Jo’burg is to be the city we dream it is capable of being, it needs to be that city for all of its residents. Not just the rich suburban minority. Drive London Road and open your eyes.

Thanks to the efforts of visionaries like Jonathan Liebmann and Adam Levy our CBD is finally regaining some of its former spark and vibe. My folks and their friends used to flock to Hillbrow on the jol (in its heyday) and today thousands of hipsters and almost-hipsters visit Braamies, Maboneng, and Newtown on sunny summery days to enjoy artisan bread, freshly brewed coffee, handmade leather goods, and of course take selfies on Nelson Mandela Bridge.

But there is much more to the CBD than this hipster revival (I’m being slightly facetious, there’s some amazing stuff going on) and the way to discover it is to get into the city, walk around, meet people and try new things. There are many folks who can help you – one of whom I work with. Anna-Belle Mulder hosts regular “SheSaidWalks” that are great fun and highly recommended.

During the Barclays Premier League, FA Cup, and Champions League, my social feeds and timelines are alight with the passionate musings, commentary, and banter of zealous football fans, all of whom reside in Jozi. Manchester United fans berate Liverpool fans. Thousands watch El Clasico. And yet when the Orlando Pirates and Kaiser Chiefs come to blows in the Soweto derby, many of these same passionate football fans are silent.

Sure, the football isn’t of the same standard as we witness in the Premier League, but perhaps an increased support base, vocal audience, and bums on seats at Soccer City will help shift things in the right direction. I’ve been to the Soweto derby at Soccer City twice and sat in the stands both times. It’s an epic experience.

While not everyone needs to be an activist, there is a surprising degree of apathy expressed by most Jo’burgers toward the political aspect of living in this city.

“Just check what the DA has done in Cape Town – it’s amazing.” “If only we had a local government who were proactive and cared about this city.”

We do. They’re everywhere. Most Jozi citizens don’t know their ward councillor, don’t attend meetings, don’t voice their opinion (unless it’s a complaint on Twitter), and don’t make an effort to contribute. If Jo’burg is going to evolve as a city, every citizen needs to pull their own political weight.

“Councillors in the City of Johannesburg serve as the interface between the citizens they represent and the municipal officials who design and implement development polices. The councillor’s job is not just to serve as the voice of the people, for the expression of their community needs, but also to act as a watchdog and ensure the municipality implements policies to address the needs of citizens. It is therefore important that should issues you log not be adequately addressed, such be brought to the attention of your local Ward or PR councillor.”

If finding your Ward or PR councillor is a challenge, I’d suggest contacting David or investigating further here. Unfortunately at the time of publishing this post the flipping map didn’t load. Go figure.

“Saruman believes it is only great power that can hold evil in check, but that is not what I have found. I have found it is the small everyday deeds of ordinary folk that keep the darkness at bay … simple acts of kindness and love.”

I love Gandalf’s response to Galadriel’s query about his faith in Bilbo Baggins in The Hobbit: An Unexpected Journey. I feel the same way about life in Johannesburg. This city thrives when ordinary Jo’burgers go out of their way to look after other ordinary Jo’burgers. I was resting on the side of Summit Road during a run a few weeks back. Some random chap stopped, holding up the line of cars behind him, and asked if I was ok. It was a tiny gesture but it meant the world to me.

Jo’burg’s future doesn’t rest in the hands of our politicians or leaders. It is not the Mayor’s responsibility. It is not captains of industry who will evolve our city. It’s you and me. The Randoms. The Ordinaries. The Averages. The Statistics. We are the people who will make this city great.